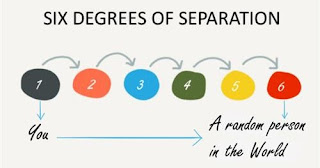 The concept of "Six Degrees of Separation" suggests that all people on average are six, or fewer, social connections away from each other.

It is also a book meme that many bloggers do where they show the connection between 6 books (by author, title words, concept, format, etc). I am not very good at that sort of thing so I don't usually participate (but like seeing others do it).

There is also a parlor game called "Six Degrees of Kevin Bacon" where people claim we can all get ourselves related to the actor Kevin Bacon within 6 people.

And there is a Broadway show and a movie called Six Degrees of Separation starring Will Smith, Donald Sutherland, and Stockard Channing. Here's the trailer:

Now, why am I writing about this? Well, sit back and check out this true story of the origin of Six Degrees of Separation.

Picture it. It's Fall 1983 and I am a freshman at Connecticut College in New London, CT. Our dorm (pictured above) has a meeting where we are all introduced to this handsome and charismatic man named David Poitier who says he is Sidney Poitier's son. He tells us that he and his dad are doing a remake of DreamGirls and parts of it will be filmed on our campus. They need extras. We can't tell anyone though. We all fell for it and hard, convinced we were going to have bit parts in a movie. And we'd meet Sidney Poitier!

David stayed with Robert, a guy who lived on the first floor of our dorm, for a couple nights then disappeared. It turns out, he took Robert's address book who had gone to Andover, a fancy private high school.

David (whose real last name is Hampton) then proceeded to visit Robert's friends at Harvard and high-up mucky-mucks who worked for TV networks (NBC? ABC? Can't remember which ones). "Poitier's son" claimed to be friends with the guy in my dorm, working his way into these people's lives. He stole, had affairs, and more. He was finally caught and the rest is history.

This article about the real story behind the Broadway show (here's the link to the original NYTimes version) mentions Connecticut College, but once the play and the movie happened, we were ignored and Harvard took center stage.

So there you go. It was a crazy experience that spawned a ton of pop culture references.