Review: How the One-Armed Sister Sweeps Her House by Cherie Jones 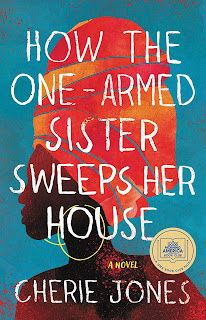 Title: How the One-Armed Sister Sweeps Her House

Summary (from Amazon): In Baxter’s Beach, Barbados, Lala’s grandmother Wilma tells the story of the one-armed sister. It’s a cautionary tale, about what happens to girls who disobey their mothers and go into the Baxter’s Tunnels. When she’s grown, Lala lives on the beach with her husband, Adan, a petty criminal with endless charisma whose thwarted burglary of one of the beach mansions sets off a chain of events with terrible consequences. A gunshot no one was meant to witness. A new mother whose baby is found lifeless on the beach. A woman torn between two worlds and incapacitated by grief. And two men driven into the Tunnels by desperation and greed who attempt a crime that will risk their freedom – and their lives.
How the One-Armed Sister Sweeps Her House is an intimate and visceral portrayal of interconnected lives, across race and class, in a rapidly changing resort town, told by an astonishing new author of literary fiction.
Review: I saw this reviewed on a blog, thought it sounded good, then saw that it is on the short list for the Women's Prize for Fiction and realized that's a category for the Popsugar challenge. So, I decided to give it a go sooner rather than later.
I know it isn't supposed to matter, but what a wonderful cover; I love the colors and the simplicity. It is definitely evocative of the story within. As the summary states, the book takes place in a beach town in Barbados. The two groups of characters should be living quite separate lives if we look at the surface of class and race, but due to a botched robbery, they all become connected to one another. That part of the book is well done. The author shows how one decision or action can alter the lives of so many.
However, I had a tough time with this book. I am not sure if it's because it is told in the third person or if it's because I read it in small bursts during the week. I didn't really connect with it on a deep level. I felt for Lala, one of the main characters, but the others, including the woman whose husband is killed, didn't draw me in. Since this book is up for a major prize, I fear it is me, not the book, who is at fault with this one. I will be interested to see what other bloggers who have read it think.
Challenges for which this counts: