YA Review: This Light Between Us by Andrew Fukuda 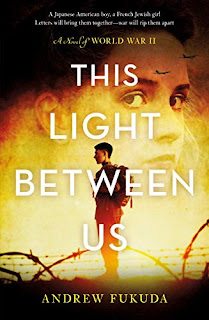 Title: This Light Between Us

Summary (from the inside flap of the book): In 1935, ten-year-old Alex Maki from Bainbridge Island, Washington is disgusted when he’s forced to become pen pals with Charlie Lévy of Paris, France—a girl. He thought she was a boy. In spite of Alex’s reluctance, their letters continue to fly across the Atlantic—and along with them, the shared hopes and dreams of friendship. Until the Japanese attack on Pearl Harbor and the growing Nazi persecution of Jews force them to confront the darkest aspects of human nature.
From the desolation of an internment camp on the plains of Manzanar to the horrors of Auschwitz and the devastation of European battlefields, the only thing they can hold onto are the memories of their letters. But nothing can dispel the light between them.
Review: Another World War II novel? And about the Holocaust and the US camps? I was a little wary because I feel I've read a lot of books on both topics, but this book won the Asian/Pacific American Literature Award from the American Library Association and one of my personal reading challenges is to read all the YMA winners.
As we all know, I love historical fiction and a good after word. I did something with this novel that I don't usually do: I read the after word first and I'm glad I did as it discussed the inspiration for this story. Did you know that Anne Frank had an American pen pal? I did not. Knowing that and the other historical realities of the Japanese American soldiers who fought in Europe made this book even stronger.
Though the book is told from Alex's perspective and we only hear about Charlie from her letters, this is an effective was to help the read "see" life as both characters see it. The letters back and forth over the years show growth, interests, life, and their relationship changing as they become teens and war breaks out for both of them. I also like that some of Alex's cartoons/drawings are in the book as they play a significant role in the story. It was also a very effective way to show the parallels between the experiences of Japanese Americans and Jews in Europe.
I was invested in this book from the first page, caring about the two families, the two characters, their journeys and their destinies. I held out hope that they would meet in some big moment to the very end (and no, I won't tell you if that happens). The racism, fighting, politics, and emotion of the times are all well described in this book that certainly deserved it award.
Challenges for which this counts: