YA Review: A Girl in Three Parts by Suzanne Daniel 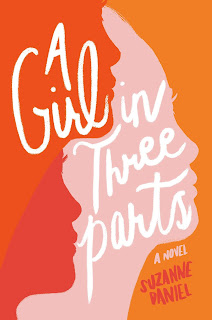 Title: A Girl in Three Parts

Summary (from the inside flap of the book): Allegra Elsom is caught in the middle. Some days she's eleven, and others she feels closer to nineteen. Some days she knows too much, and others she feels hopelessly naive. Some days she is split in three, torn between conflicting loyalties to her grandmothers, Matilde and Joy, and her father, Rick--none of whom can stand to be in a room together since the decades-old tragedy that hit their family like a wrecking ball.
Allegra struggles to make peace in her family and navigate the social gauntlet at school while asking bigger questions about her place in the world: What does it mean to be "liberated"? What is it about "becoming a woman" that earns her a slap in the face? What does it mean to do the right thing, when everyone around her defines it differently?
As the feminist movement reshapes her Sydney suburb, Allegra makes her own path--discovering firsthand the incredible ways that women can support each other, and finding strength within herself to stand up to the people she loves.
Readers will not soon forget Suzanne Daniel's poignant debut, or the spirit of sisterhood that sings out from its pages.
Review: I got this book based on a review of it on a blog and for the life of me I cannot remember whose blog it was so apologies! And, I got the book quite a while ago so when I assigned it to myself for March reading, I didn't remember anything about it except that it's YA. So, imagine my surprise to learn it's set in Australia and Allegra's three parts are pieces of her heart that belong to her two grandmothers and her father. Not literally. But she is torn between family members who just don't get along. They all love Allegra before anything else and that's what keeps this family unit together.
At first I wasn't sure how this book was going to work for me, but I ended up reading it in one afternoon, pulled into the lives of this family, Allegra's new best friend, Patricia, the trials of being a 13-year old without a mother, and trying to figure out what it means to be a liberated woman in the 1970s. That last part doesn't really enter the story until about half way in and I think that's when I found myself really into the book.
Each of the characters is peripherally related to battered women and children, women's shelters, and escaping bad marriages. We don't hear the details and really it's about how we can help others rather than the gory details. As a young person, Allegra doesn't really understand a lot of what goes on around her so the reader learns as she does, which is effective. With Helen Reddy's "I am Woman" as a theme song, the characters find their way to each other and themselves by the end of the novel in a way that seems realistic and is satisfying.
Challenges for which this counts:

Email ThisBlogThis!Share to TwitterShare to FacebookShare to Pinterest
Labels: 4 Stars, challenges 2021, YA