YA Review: You Should See Me in a Crown by Leah Johnson (CYBILS finalist) 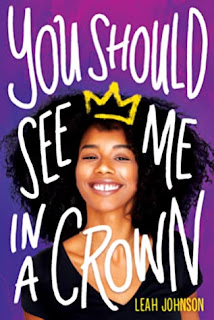 Title: You Should See Me in a Crown

Summary (from the inside flap of the book): Liz Lighty has always believed she's too black, too poor, too awkward to shine in her small, rich, prom-obsessed midwestern town. But it's okay -- Liz has a plan that will get her out of Campbell, Indiana, forever: attend the uber-elite Pennington College, play in their world-famous orchestra, and become a doctor.
But when the financial aid she was counting on unexpectedly falls through, Liz's plans come crashing down . . . until she's reminded of her school's scholarship for prom king and queen. There's nothing Liz wants to do less than endure a gauntlet of social media trolls, catty competitors, and humiliating public events, but despite her devastating fear of the spotlight she's willing to do whatever it takes to get to Pennington.
The only thing that makes it halfway bearable is the new girl in school, Mack. She's smart, funny, and just as much of an outsider as Liz. But Mack is also in the running for queen. Will falling for the competition keep Liz from her dreams . . . or make them come true?
Review: This book was a finalist for the CYBILS Awards so I read it as a round 2 judge.
When I was in school, and at the schools in which I have worked, the senior class nominates and votes on prom king and queen. Actually, we didn't even have prom king and queen (we had them for Homecoming instead). Anyway, in this story, candidates apply to be king and queen, campaign and have to do volunteer work, etc in order to win the title and the college scholarship. So different! I wonder if it's really like that anywhere in the US.
I thought this book was well done and tackled issues of race, class, feeling good about oneself even though you aren't "the norm," and popularity issues that come about in high school. Gosh, I am so glad I am past that time of life! It was fun, but I wouldn't do it again.
I am glad this book was a finalist as it had been on my TBR list.
Challenges for which this counts: Email ThisBlogThis!Share to TwitterShare to FacebookShare to Pinterest
Labels: 4.5 Stars, challenges 2021, CYBILS, YA