YA Review: The Voting Book by Brandy Colbert 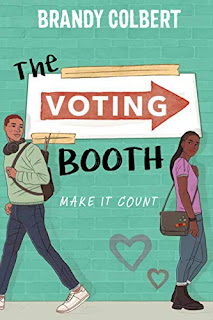 Summary (from the inside flap of the book): Marva Sheridan was born ready for this day. She's always been driven to make a difference in the world, and what better way than to vote in her first election?
Duke Crenshaw is so done with this election. He just wants to get voting over with so he can prepare for his band's first paying gig tonight.
Only problem? Duke can't vote.
When Marva sees Duke turned away from their polling place, she takes it upon herself to make sure his vote is counted. She hasn't spent months doorbelling and registering voters just to see someone denied their right.
And that's how their whirlwind day begins, rushing from precinct to precinct, cutting school, waiting in endless lines, turned away time and again, trying to do one simple thing: vote. They may have started out as strangers, but as Duke and Marva team up to beat a rigged system (and find Marva's missing cat), it's clear that there's more to their connection than a shared mission for democracy.
Romantic and triumphant, The Voting Booth is proof that you can't sit around waiting for the world to change?but some things are just meant to be.
Review: How could I resist a book that is about voting as we finish the Democratic Convention, the Republican one begins next week, and the election is quickly approaching?!
Marva and Duke are both likable characters. They are smart, kind, interested in the world around them, and care about and help other people. They alternate chapters, moving the story along at a quick pace even though the whole thing takes place in one long day. We know from the beginning that they'll get together, but I was okay knowing because it just felt right that they do.
While this book could be a fluff story rom-com, it actually has lots of depth and is timely given the upcoming national election and the Black Lives Matter movement. Duke's difficulties with voting represent the issues in many (mostly southern) states in this country where polling places have been closed down, there aren't enough ballots, and people magically disappear from the voting rolls. In addition, the treatment of black Americans when they are pulled over by the police and the "talk" that they receive from their parents is included in a natural way.
At first I thought this book wouldn't hold my attention, but it quickly did and I read it in two sittings.
Challenges for which this counts:

Email ThisBlogThis!Share to TwitterShare to FacebookShare to Pinterest
Labels: 4.5 Stars, challenge 2020, POC, YA