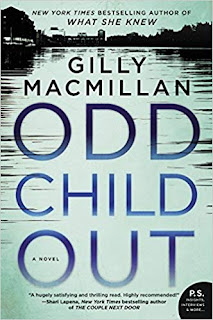 Summary (from the inside flap of the book): Best friends Noah Sadler and Abdi Mahad have been inseparable since the day they met. Students at one of Bristol's elite private schools, the tow teenage boys, who are seemingly unalike--one the frail, privileged sone of a photographer, the other a Somalian refugee on scholarship--share a nerdy, competitive love of school and chess. But when Noah is found floating unconscious in a seedy section of the city's canal, Abdi can't--or won't--tell anyone what happened.

Detective Inspector Jim Clemo--newly back from a leave of absence after a case went tragically wrong--is assigned to investigate the unfortunate accident. But what appeared to be a simple prank carried too far threatens to ignite tensions over race and immigration that have the city on edge.

DI Clemo's frustration builds, as each bit of information leads to more troubling questions. Then Abdi vanishes. Is he guilty of a crime, or is something else behind his silence and disappearance? Clemo has little to go on besides his own instincts--which have failed him once before. With two young lives hanging in the balance, he must probe into the lives of two families fighting to save their sons.

None of them--not the detective nor the boy's parents--know how far they will go, what demons they will face, or what pain they will suffer as their secrets slowly come to light.

Because the truth hurts.

Review: I have had this one on my shelves for quite a while and the end of Thanksgiving break seemed like a good time to read it and I finished it just before going to bed on Sunday night. Good timing.

My heart goes out to many of the characters in this book. Noah for his illness and yearning to be "normal," Abdi for his conflict between being Noah's friend and having other friends, Abdi's family for trying to keep their secret, Noah's parents for grieving for their child (I cannot imagine anything worse), and DI Clemo for trying to do his best in a system that doesn't always allow it.

I found the twists and turns in this story very compelling. While at first it seems to be a mystery, it soon becomes much more. It's a commentary on immigration and refugees as well as truth seekers of all sorts.