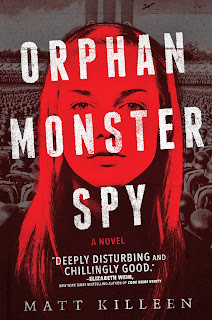 Summary (from the inside flap of the book): Germany, 1939. After her mother is shot at a checkpoint, fifteen-year-old Sarah finds herself on the run from a government that wants to see her, along with every other Jew, dead. Then she meets a mysterious man who needs Sarah to pull off a spy mission he can't attempt on his own: infiltrate a boarding school attended by the daughters of Nazi top brass, befriend the girl whose father is a high-ranking scientist, and find the blueprints to a bomb that could destroy the cities of Western Europe.

With years of training from her actress mother in the art of impersonation, Sarah thinks she's ready. But nothing prepares her for her cutthroat schoolmates, and soon she's embroiled in a battle for survival unlike any she'd ever imagined--and fighting to hold onto her true self.

Review: So, I am counting this book for the Monthly Motif of "One Sitting Reads" even though it is over 400 pages because I read it in one day. Yes, I was pulled into this one and it didn't let go.

Sarah isn't exactly likable, she's a bit too tough for that, but I admired her, rooted for her, and wanted her to be successful. She is bright, brave, naïve, careless, and strong, all good qualities for a spy and a main character. Her "sponsor" also plays his role well, even though we don't ever really trust him. The many supporting characters are by turns cruel, pathetic, and scary; people who really make the book hum and the reader tense.

The setting is WWII in Germany, which for me, always works. I have read a lot of WWII novels and this one is like no other that I have read so that's really good. The story is tense, interesting, and I'll admit, at times, a bit fantastical. And then I read the author's afterword. As you all know, I love the afterword of historical fiction. Much of this book is based on events and people that really happened during WWII, which makes this book take on a whole new level for me. If you like WWII novels, definitely give this one a read.