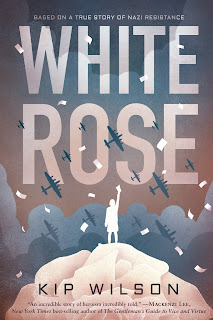 Summary (from the inside flap of the book): German university student Sophie Scholl is about to face sentencing for a crime punishable by death: distributing pamphlets that speak out against Hitler's regime. How did she and her beloved brother end up here? Is it too late to do anything to save her own life?

White Rose retells the incredible true story of Sophie Scholl, a young activist who put her life on the line as she tried to rally her fellow Germans against a fascist regime. This novel asks the most difficult question that remains timely today--what would you risk not for your own freedom, but for someone else's?

Review: The Story of the White Rose is one for which I have always had an affinity. I was a German Studies major in college and lived in Germany during my senior year so that probably has something to do with it. One of my first lessons as a student teacher was taking on the roll of Sophie Scholl's mother reading her daughter's diary.

This book tells the story in a wonderful way. I hadn't realized it was written in verse until I picked it up to read it and I wasn't sure how I felt about that until I began reading. The author is a poet and she does a fantastic job conveying the facts, emotions, and history of Sophie's story onto the page.

While this book is fiction, it is based largely on news accounts, letters, diaries, etc so is true to the history of Sophie, her parents, her brother Hans, their friends Fritz, Werner, and Christophe as World War II begins and their activism grows.

I highly recommend this book for both teens and adults.