YA Review: Internment by Samira Ahmed 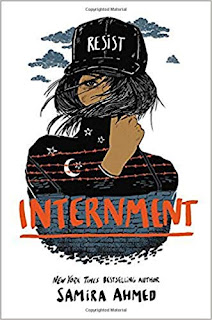 Summary (from the inside flap of the book): It's been one year since the census landed seventeen-year-old Layla Amin and her family on the registry. Five months since the attorney general argues that Korematsu v. United States established precedent for relocation of citizens during times of war. And one month since the president declared that "Muslims are a threat to America."

And now, Layla and her parents are suddenly taken from their home and forced into an internment camp for Muslim American citizens.

With the help of newly made friends also trapped within the internment center, her boyfriend on the outside, and an unexpected alliance, Layla begins a journey to fight for freedom, leading a revolution against the internment camp's Director and his guards.

Review: Warning: this is not my usual style of book review.

This book is so timely. And I know many will say that Muslims aren't in camps, it won't happen, but I am sure that's what the Japanese thought in the 1940s as well. And what Latinx people are thinking now as they are separated from their children or sent back to Central America.

Writing this book was courageous and necessary. To resist, to speak out, and to point out when our leaders are wrong is important. Racism, bigotry, violence, and acceptance of those acts is unAmerican. In her author's note, she says, "When fascism comes to America, it will come draped in the American flag." How true that is.

I am tired of cringing at the news every morning and feeling angry toward to those with power in DC. This book puts it all out there for readers to think about and I hope that many young people read it and find their voices.

Email ThisBlogThis!Share to TwitterShare to FacebookShare to Pinterest
Labels: 4.5 Stars, Challenge 2019, POC, YA