TLC Book Tour Review: Within These Lines by Stephanie Morrill 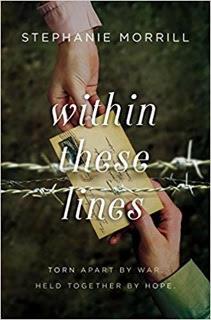 FTC Disclosure: I was given a copy of this book from TLC Book Tours for an impartial review

Summary (from the inside flap of the book): Evalina Cassano's life in an Italian-American family living in San Francisco in 1941 is quiet and ordinary until she falls in love with Taichi Hamasaki, the son of Japanese immigrants. Despite the scandal it would cause and that interracial marriage is illegal in California, Evalina and Taichi vow they will find a way to be together. But anti-Japanese feelings erupt across the country after the attack on Pearl Harbor, and Taichi and his family are forced to give up their farm and move to an internment camp.

Degrading treatment makes life at Manzanar Relocation Center difficult. Taichi's only connection to the outside world is treasured letters from Evalina. Feeling that the only action she can take to help Taichi is to speak out against injustice, Evalina becomes increasingly vocal at school and at home. Meanwhile, inside Manzanar, fighting between different Japanese-American factions arises. Taichi begins to doubt he will ever leave the camp alive.

With tensions running high and their freedom on the line, Evalina and Taichi must hold true to their ideals and believe in their love to make a way back to each other against unbelievable odds.

Review: I am a lover of historical fiction and I think YA historical fiction plays an important role in exposing teenagers to history in a way that makes it interesting and accessible. The internment of Japanese Americans during World War II is particularly important for students (and adults) to read about since we are quick to judge Germans about the Holocaust (as we should). While Manzanar was no Auschwitz, the rounding up of Japanese Americans is a horrifying and embarrassing time in our nation's history.

Centering this story on a loving relationship is smart. Teens love a good Romeo and Juliet story and will route for these two characters to be together. They are smart, kind, caring, and treat each other well--all good examples of how we want relationships to be. I also liked that Taichi's best friend is Latino and that their two families support one another personally and professionally throughout the whole ordeal.

While I think this book is well done, it did feel a bit pollyana-ish to me, especially the ending. That said, I think it will do well with teens and would be a good addition to a school library.