Review: A Very Large Expanse of Sea by Tahereh Mafi 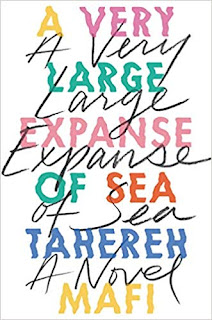 Summary (from the inside flap of the book): In 2002, a year after 9/11, and Shirin has just started at yet another school. It's an extremely turbulent time for the world, but also for someone like Shirin, a sixteen-year-old Muslim girl who's tired of being stereotyped.

Shirin is never surprised by how horrible people can be. But she's tired of the rude stares, the degrading comments--even the physical violence--she endures as a result of her race, her religion, and the hijab she wears every day. She decided long ago not to trust anyone anymore, and she doesn't expect, or even try, to fit in anywhere or let anyone close enough to hurt her. Instead, she drowns her frustrations in music and spends her afternoons breakdancing with her brother.

But then she meets Ocean James. He's the first person in forever who really seems to want to get to know Shirin. It terrifies her--they seem to come from two irreconcilable worlds--and Shirin has had her guard up for so long that she's not sure she'll ver be able to let it down.

Review: I first read about this book on Books In the Spotlight when Rummanah recommended it. Books like this are so important as they bring to the fore issues facing teenagers in a way that makes them realize they are not alone. True, not every adolescent who reads this book is Muslim, but my guess is that, sadly, most of them have been made fun of, tormented, stereotyped (for race, ethnicity, religion, sexuality, gender, etc), or harassed. This story will show them they are not alone.

Not only is this book important for the reasons I have just stated, but it will also show them the impact of fear and hatred. Insensitive questions, mean comments, blind gossip... it all has an impact even if the perpetrator doesn't see it. This book brings all of this front and center.

I was married to an Arab man when 9/11 happened. We were lucky that we didn't experience events like those described in this book, but we were both well established in our community by 2001, having been there for decades. I think that helped. But when we traveled, it was a different story all together.

Yes, this book has YA romance so be prepared for that. It's always intense and love beyond everything else. But the romance in this book plays an important role. I hope students read this novel and can find something to take away from it. I am sure they will especially given the way public hatred seems to be okay these days in the US.

Email ThisBlogThis!Share to TwitterShare to FacebookShare to Pinterest
Labels: 4.5 Stars, POC, Romance, YA