Review: Picture Us in the Light by Kelly Loy Gilbert 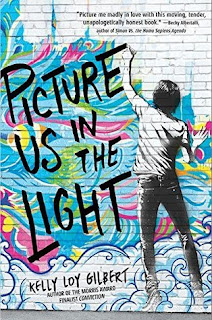 Summary (from the inside flap of the book): Danny Cheng has always known his parents have secrets. But when he discovers a taped-up box in his father's closet filled with old letters and a file on a powerful Bay Area family, he realizes there's much more to his family's past than he ever imagined.

Danny has been an artist for as long as he can remember, and it seems his future is set, with a scholarship to RISD and his family's blessing to pursue the career he's always dreams of. Still, contemplating a future without his best, friend Harry Wong, by his side makes Danny feel a panic he can barely put into words. Harry's and Danny's lives are deeply intertwined, and as they approach the one-year anniversary of a tragedy that shook their friend group to its core, Danny can't stop asking himself if Harry is truly in love with his girlfriend, Regina Chan.

When Danny digs deeper into his parent's past, he uncovers a secret that disturbs the foundations of his family history, and the carefully constructed façade his parents have maintained begins to crumble. With everything Danny cares about in danger of being stripped away, he must face the ghosts of the past in order to build a future that belongs to him.

Review: I heard that this novel had a number of starred reviews so I eagerly picked it up, but was disappointed at first. It didn't grab me the way I expected and not much really happens in the story until well into the second half of the book when the family secrets are s l o w l y revealed.

I'd give the first half of the book, the establishing of the main character, his parents, his dreams, his friends a 3.5 or 4. Probably closer to a 4. I like the main character and I could definitely empathize with him. He is conflicted about who he is, what people expect of him, and what he is supposed to do with himself. His art is his everything and it defines him, yet there is so much more going on.

I'd give the second half of the book al 4.5 as all the moving parts come together and I felt like I finally understood his parents and the events in Danny's life. There is a lot going on in this family and story; we learn that everyone has multiple facets and issues that make up who they are and why they behave the way they do. Friendship and family are paramount for the characters, each of them sacrificing for the good of others.

All in all I do see why this got starred reviews: the relationships are well done and the tension is all important, I just wish it had a quicker start.

Challenges for which this counts:  none