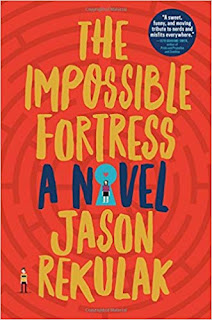 Summary (from the inside flap of the book): Until May 1987, fourteen-year-old Billy Marvin of Wetbridge, New Jersey, is a nerd, but a decidedly happy nerd.

Afternoons are spent with his buddies, watching copious amounts of television, gorging on Pop-Tarts, debating who would win in a brawl (Rocky Balboa or Freddy Krueger? Bruce Springsteen or Billy Joel? Magnum PI or TJ Hooker?), and programming video games on his Commodore 64 late into the night. Then Playboy magazine publishes photos of Wheel of Fortune hostess Vanna White, Billy meets expert programmer Mary Zelinsky, and everything changes.

Review: If you lived through the 1980s (and I did, I graduated from college in 1987, the year in which this book is set) you will probably love the cultural references. The inside flap states that this book is a love letter to the 1980s and that is so true. The music, the fashion, the TV shows, the style of living, and, yes, the computers. I remember the Commodore 64 even though I got an Apple IIe for graduate school a few years later. And early email! Holy moly, it's all in this book.

In addition to the fabulous '80s setting, I enjoyed the characters and story. Teenage boys obsessed with Vanna White in Playboy? I remember that. Early computer games? Yep, that, too. Billy is a wonderful character who embodies the era and his age. And I love his friendship with Mary that is based on programming, but has a small hint of romance. Billy's friends remind me of the boys in many '80s shows: they lead each other into stupid situations, egg each other on, but they are there for each other to the end.

This is a book about friendship, coming of age, and figuring it all out and it does it all well.

Challenges for which this counts:  none