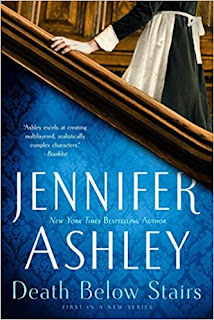 Summary (from the inside flap of the book): Highly sought after cook Kat Holloway takes a position in a Mayfair mansion and soon finds herself immersed in the odd household of Lord Rankin. Kat is unbothered by the family's eccentricities as long as they stay out of her kitchen, but trouble finds its way below stairs when her young Irish assistant is murdered.

Intent on discovering who killed the helpless kitchen maid, Kat turns to the ever-capable Daniel McAdam, who is certainly much more than the charming deliveryman he pretends to be. Along with the assistance of Lord Rankin's unconventional sister-in-law and a mathematical genius, Kat and Daniel learn that the household murder was the barest tip of a plot rife with danger and treason--one that's a threat to Queen Victoria herself.

Review: When I read about this book on Bloggin' 'Bout Books, my initial thought was that this is a book for me. I loved Upstairs, Downstairs and Downton Abbey. Then I started the book and I thought the author was trying a bit too hard to be the time period. And the next thing I knew, I was caught up in it and rolling right along with the period / era turns of phrase.

Yes, this is a mystery and there are two that run parallel through the book (perhaps connected, perhaps not, you'll have to read to find out): who killed Sinead, the cook's assistant and what the heck is the dashing Daniel McAdam investigating? For me, it turns out the latter was more interesting.

I liked the characters and felt I could "see" the costumes and settings. Maybe that's because I've watched so many episodes of similar PBS shows, but I think it's also because Ashley does a good job of immersing her reader in the time and place through use of language and description of the food, the smells, the class differences, etc. And oh, the class differences. Britain has such class hierarchies even to this day. Back in the late 1880s it must of been so strict!

Kat Holloway, the main character and cook for the household, is great. She is spunky, knows her place, but steps out of it often for good reason, is smart, and is smitten with Mr. McAdam. I do hope they get together!

If you like historical settings, a good mystery, and a clever no-nonsense main character, then definitely pick this one up.