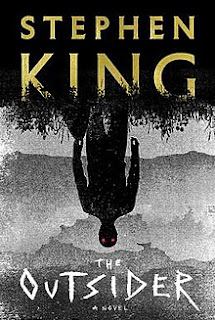 Summary (from the inside flap of the book): An eleven-year-old boy's violated corpse is found in a town park. Eyewitnesses and fingerprints point unmistakably to one of Flint City's most popular citizens. He is Terry Maitland, Little League coach, English teacher, husband, and father of two girls. Detective Ralph Anderson, whose son Maitland once coached, orders a quick and very public arrest. The case seems ironclad, especially when Anderson and the district attorney are able to add DNA evidence to go with the fingerprints and witnesses. But Mailtland has an alibi, and it turns out his story has incontrovertible evidence of its own.

How can two opposing stories by true? What happens to a family when an accusation of this magnitude is delivered? When must reason or rationality be abandoned in order to explain the inexplicable? As the investigation expands and horrifying answers begin to emerge, King's propulsive story kicks into high gear, generating strong tension and almost unbearable suspense. Terry Maitland seems like a nice guy, but is he wearing another face? When the answer comes, it will shock as only Stephen King can.

Review: I am not a horror book reader (or movie watcher) so don't normally read Stephen King books. I did read Mr. Mercedes and gave it 5 /5 when I read it 4 years ago, so when I heard that those characters make an appearance in Outsider and that this book wasn't horror, I was all over it even though it's over 500 pages!

I managed to read the first half of this book in one day, that's how good it was. I was totally pulled in from the first horrifying pages of the murder. While the crime was awful, it's the only part that is so totally icky. After that it is intriguing, fascinating, and yes, creepy. I did stop reading when it got to about 9:30pm so I could watch a sitcom before I went to bed, hoping to fill my brain with laughter instead of creep. It worked, but I still had weird dreams. Then I finished the rest of the book in one sitting this morning.

It is so good! I loved the characters, their interactions, their human-ness of emotions, screw-ups, and relationships. The pace of the story was perfect, my heart was RACING toward the end. Stephen King really is masterful at writing, settings, characters, and more.