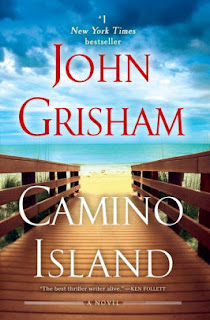 Summary (from the inside flap of the book): A gang of thieves stage a daring heist from a vault deep below Princeton University's Firestone Library. Their loot is priceless, impossible to resist.

Bruce Cable owns a popular bookstore in the sleepy resort town of Santa Rosa on Camino Island in Florida. He makes his real money, though, as a prominent dealer in rare books. Very few people know that he occasionally dabble in unsavory ventures.

Mercer Mann is a young novelist with a severe case of writer's block who has recently been laid off from her teaching position. She is approached by an elegant, mysterious woman working for an even more mysterious company. A generous monetary offer convinces Mercer to go undercover and infiltrate Cable's circle of literary friends, to get close to the ringleader, to discover his secrets.

But soon Mercer learns far too much, and there's trouble in paradise.

Review: Oh my goodness, it's a John Grisham that isn't about lawyers, murder, or embezzlement! This one is about writers, precious manuscripts, and deception and was a fun read.

The world of independent bookshops, holiday towns, and close knit friend groups is a great setting for a story. Adding in stolen F. Scott Fitzgerald manuscripts is just an added bonus. I liked the characters and the story and until the end I wasn't totally sure where the manuscripts were and what would happen to them so that is good.

There some romance, lots of book and writing talk, some FBI work, and a bunch of intrigue. What more could we want from a summer read?!