Review: One of Us is Lying by Karen M. McManus 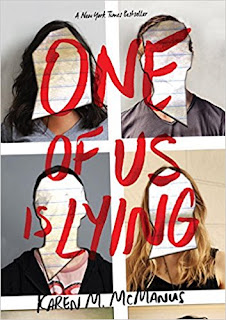 Title: One of Us is Lying
Author: Karen M. McManus
Year Published: 2018

Summary (from the inside flap of the book): Pay close attention and you might solve this. On Monday afternoon, five students at Bayview High School walk into detention.

Bronwyn, the brain, is Yale-bound and never breaks a rule.

Addy, the beauty, is the picture-perfect homecoming princess.

Nate, the criminal, is already on probation for dealing.

Cooper, the athlete, is the all-star baseball pitcher.

And Simon, the outcast, is the creator of Bayview High's notorious gossip app.

Only, Simon never makes it out of that classroom. Before the end of detention, Simon's dead. And according to investigators, his death wasn't an accident. On Monday, he died. But on Tuesday, he'd planned to post juicy reveals about all four of his high-profile classmates, which makes all four of them suspects in his murder. Or are they just the perfect patsies for a killer who's still on the loose?

Everyone has secrets, right? What really matters is how far you would go to protect them.
Review: So, the Breakfast Club meets murder mystery. Kind of. That's what I thought when I started reading this novel since the characters mirror the ones in the movie. But, as soon as detention is over, which happens quickly, the novel goes in its own direction. Each character gets to tell their version of events during and after detention as the book progresses, which I liked because we get to know all sides of the story and it makes it seem as if any of them could have done it.

I really enjoyed this book even though in the middle I thought it was going on a bit long. Then all of a sudden I was turning pages to see what would be revealed next. I wanted the kids to be innocent, I wanted their lives to turn out alright, and I wanted whomever was framing them to get in trouble. I won't tell you if that happens though. You need to read the book yourself to find that out.

This book is also a interesting twist, or view, of society. Guns in school, hate lists, and more seem to be in the news these days so perhaps this book sat well with me. Whatever the reason, I liked it. And, as with any good YA book, there is also some romance, some substance abuse issues, and an LGBTQ quotient. So all of that contributes to enjoyable reading and something for everyone.