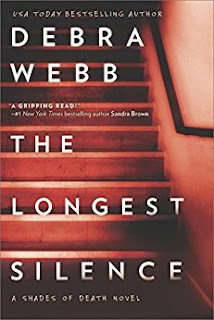 FTC Disclosure: I received a copy of this book from the publisher

Summary (from the inside flap of the book): A killer stole her voice. Now she's ready to take it back. Joanna Guthrie was free. She had been for eighteen years--or so she needed everyone to believe. What really happened during the longest fourteen days fo her life, when she and two other women were held captive by the worst kind of serial killer, wasn't something she could talk about.

But when more women go missing in an eerily similar manner, Jo knows her prolonged silence will only seal their fates. She's finally ready to talk; she just needs someone to listen. FBI special agent Tony LeDoux can't deny he finds Jo compelling: he's just not sure he believes her story. But with the clock ticking, Jo will do anything to convince him, even if it means unearthing long-buried secrets that will land them squarely in the crosshairs of the killer....

Review: It's always a pleasure to be part of a TLC Tour. They really know the kind of book I like and this one did not disappoint!

This novel was a real page-turner for me and a quick read. It says it is a Shades of Death novel and I don't know if the same characters appear in the other books in the series, but it didn't seem to matter one bit.

The story of the kidnapping of college-age girls and their mistreatment will haunt any female or parent of a girl. As someone whose child is going off to college next year, this hit a bit close, but it was really well done. I felt the fear from the young women, the evilness of their captors and all those involved, and the desperation of those trying to find them.

I liked and understood the character of Jo, the original victim of a kidnapping eighteen years prior. She definitely has PTSD and hasn't done very well at readjusting to "regular" life. Tony, the ex-FBI agent, is also troubled, but together they help each other figure some things out, find friendship and deal with some of their demons.