Review: Y is for Yesterday by Sue Grafton 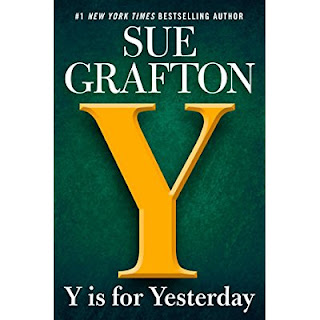 Summary (from the inside flap of the book): The darkest and most disturbing case report from the files of Kinsey Millhone begins in 1979, at an elite private school that sets a high bar for academic achievement and turns a blind eye to the risky behavior and social sabotage students use to get what they want. With absentee parents and the money to make mistakes disappear, they are free to make their own rules.

That is, until four teenage boys sexually assault a freshman--and film the attack. Not long after, the tape goes missing and the suspected thief, a fellow classmate, is murdered. In the investigation that follows, one boy turns state's evidence and two of his peers are convicted. But the ring-leader disappears without a trace.

Now it's ten years later and one of the perpetrators, Fritz McCabe, has been released from prison. Moody, unrepentant, and angry, he is a stunted child expecting to pick up his old friendships and familiar habits--until a copy of the missing tape arrives with a ransom demand. That's when his parent call Kinsey Millhone for help. As she is drawn into their family drama, she keeps a watchful eye on Fritz. But he's not he only one being haunted by the past. The vicious sociopath last seen in X has a grudge against Millhone and is leaving traces of himself for her to find....

Review: The second to last Sue Grafton novel! I just had to read this and I will also definitely read the "Z" book when it comes out. I love that these mysteries are set in my town, Santa Barbara, even though she calls it Santa Teresa. I like that I know the businesses and streets that she is talking about!

I think this is my favorite of Sue Grafton's mysteries and it gripped me from the first page. Maybe that's because I hadn't read a Grafton novel in a long time and it felt like "coming home." Or maybe it's because the storyline reminded me of a local news story from around the year 2000 to which I felt quite connected. The real story didn't involve a sex tape (but that seems to be common now, so a very timely plot!), but rather a drug debt. 5 boys/young men kidnapped a teen, held him and drugged him for 3 days and then killed him, burying him in our local hills. I knew two of the boys: one was my student and one played soccer for my (now) ex-husband. It was all horrifying and eventually a movie was made about it ("Alpha Dog," which I refuse to see).

Anyway, I thought her characters were very believable, the story was gripping, and I love revisiting with Kinsey and all her neighbors and friends!