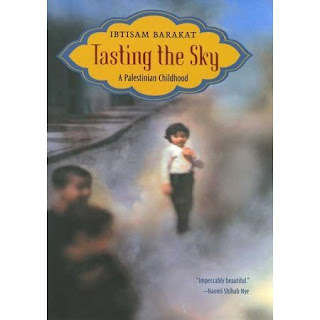 Summary (from the back of the book): Ibtisam Barakat captures what it is like to be a child whose world is shattered by war. With candor and courage she stitches together memories: fleeing from her home and becoming separated from her family as the Six-Day War breaks out; the harshness of life as a Palestinian refugee; and her unexpected joy when she discovers Alef, the first letter of the Arabic alphabet, and his family of letters. As language becomes her refuge--a true home that can never be taken away--she begins to piece together the fragments of her splintered world.

Review: A friend suggested I read this book and I was in the mood for a non-fiction book so I said yes. The opening section (one of three) has tinges of Holocaust literature--how ironic! A group of Palestinians pulled off a bus at gunpoint by soldiers with guns, herded into a detention center, their ID cards checked (and different from Israeli citizens' ID cards), they are questioned and held for hours for no particular reason. Of course, they were not put in a camp. Yet.

The author split this book into three parts, the first and third being only a few pages each. The bulk of the book is the second part, which chronicles the author's life from age three and a half to seven years old. I feel like her story is one that so many Palestinians have lived: the Six Day War meant that they fled to Jordan to live in a refugee camp for almost five months, and upon their return to the West Bank, they lived in a simple one-room house, raising a goat and some chickens to have food. They even put their children in an orphanage for a while.

I liked the combination of life story, Palestinian culture, and history that are woven together in this book. At the end the author suggests other books and a documentary that will expand the reader's knowledge of the Palestinian and Israeli conflict and cultures. The documentary is one I showed in my world history course that is fantastic: Promises. It is about seven Israeli and Palestinian teenagers who meet and become friends, what their lives are like, and how they feel about the conflict.
Challenges for which this counts:

Email ThisBlogThis!Share to TwitterShare to FacebookShare to Pinterest
Labels: 4 Stars, challenge 2017, Non-Fiction, YA