I will talk about books next Sunday to stick with my every-two-weeks cycle. Today I am doing a special Sunday Salon entry that is all about the Women's March.

Did you attend a march? If so, where and how did it feel?

I planned on going to Los Angeles for the Women's March, which would have been an all day affair since LA is two hours away. There were about 16 buses going down from Santa Barbara, but, last Sunday I saw a posting that there was going to be a march in my town! So much better than going to LA. So I responded and was asked by the organizer to set up a Facebook Event Page for the march. Well, for future reference, when you set up a Facebook Event Page, you become the face of an event. :-) I ended up finding out about getting permits from the police and city, calling to get some of the speakers, and fielding LOTS and LOTS of questions. 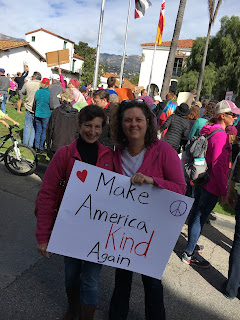 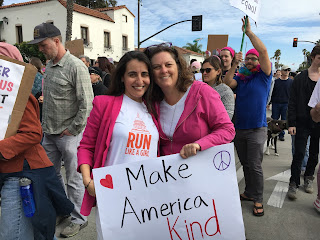 The event turned out really well. It turns out the original organizer had others doing work as well (this was not communicated. Communication is essential, people). We had 8,000 people show up and march peaceably from a downtown plaza one mile to the beach and back. It felt so good to see that many people happy, with positive energy, caring about one another and issues that are important to me. There were men and women, people of all ages, shapes and sizes, and economic class. The town really came together. It's difficult to tell, but that is a sea of people stretching up the street under the freeway bridge. 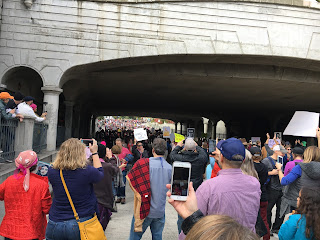 To see images of the women's marches that took place around the world yesterday, go to the NY Times article.