Review: X: a novel by Ilyasah Shabazz and Kekla Magoon 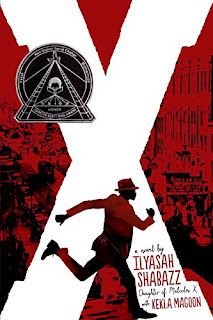 
Genre: YA historical fiction
Pages: 348 (plus author's thoughts, timelines, etc)
Rating: 4 out of 5

Summary (from the inside flap of the book): Malcolm Little's parents have always told him that he can achieve anything but from what he can tell, that's nothing but a pack of lies--after all, his father's been murdered, his mother's been taken away, and his dreams of becoming a lawyer have gotten him laughed out of school. There's no point in trying, he figures, and lured by the nightlife of Boston and New York, he escapes into a world of fancy suits, jazz, girls, and reefer.

But Malcolm's efforts to leave the past behind carry him in to increasingly dangerous territory when what starts as some small-time hustling quickly spins out of control. Deep down, he knows that the freedom he's found is only an illusion--and that he can't run forever.

Based on the actual events of Malcolm X's life, this novel sheds new light on the formative years of the human-rights leader whose words and actions shook the world.

Review: This book was an Honor book for the Coretta Scott King Author Award for best YA book by an African American author. Ilyasah Shabazz is the daughter of Malcolm X so I thought her version of his early life would be an interesting one to read. This is a novel, but is based on interviews with Malcom X's family and friends. I think it's a novel since she created the dialogue.

The authors talked to a lot of Malcom X's associates, friends, and relatives to get to the story of his early life and it shows. I had no idea where he came from (Lansing, Michigan) and what his life was like when he was in his late teens and early twenties living in Boston and Harlem in the 1940s. He was a real hustler, con man, and pot smoker! He was a good dancer, a real ladies man, and a sharp dresser.

When he was finally caught for breaking and entering as well as burglary, he was sent to prison where he began to listen to fellow prisoners who were members of the Nation of Islam. They convinced him that words were stronger than fists, that ideas could conquer, and that Allah was the right path. From that moment, he ceased being Malcolm Little or Detroit Red and became Malcolm X.