Review: Most Dangerous by Steve Sheinkin 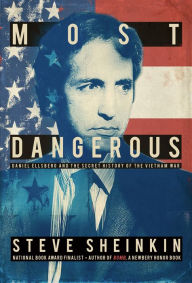 Summary (from the inside flap of the book): In 1964, Daniels Ellsberg was one of the Pentagon insiders helping to plan a war in Vietnam. The mountainous Asian country had long been a clandestine front in America's Cold War with the Soviet Union. The US Government wold do anything to stop the spread of communism--with or without the consent of the American people.

But as the fighting in Vietnam escalated, Ellsberg turned against the war. He had access to a top-secret government report known as the Pentagon Papers and knew it could blow the lid off of years of government lies. But did he have the right to expose decades of presidential secrets? And could one man, alone, face the wrath of the government?

This is the story of seven bloody years that transformed Daniel Ellsberg from a government insider into the "most dangerous man in America" and the storm that would follow when the secrets of the Vietnam War were finally known.

Review: This book won the YALSA Award for Excellence in YA Non-Fiction this year. And it's no surprise. It takes a very complicated topic, the Pentagon Papers, and explains it for young adults. I learned so much! Sheinkin has a cast of characters at the front that is great for teenagers (and adults) to reference when they read this book. For me, these are names that I've always heard of, but some of whom I was never quite sure of their role in the Pentagon Papers and the Watergate fiasco. Yes, the book finishes up with Watergate and how it is all tied together.

The corruption at the top levels of government from the mid-1960s through the early 1970s is rampant. I had no idea that the Presidents (from Truman to Nixon) all knew that there was no way we could "win" in Vietnam, but persisted in sending over hundreds of thousands of our young men anyway. They continued to bomb civilians in Vietnam even though it was a losing proposition from day one. What a waste.

And the Watergate nastiness just adds insult to injury. The play-by-play of Daniel Ellsberg photocopying the Pentagon Papers, distributing them to various people in the media, and then hiding out as it all starts to fall apart is really good drama. Should he have been tried for treason? I don't think so. Apparently that means that there was a threat to national security and with the release of the papers no one was put in danger except the politicians who made horrible choices.

As an aside, I was talking about all this with my parents and asking them what they remember of the Pentagon Papers and Daniel Ellsberg. We only got a television in 1971 and my mom says she remembers being glued to the television as it all unfolded. Then she says, "Oh, and we had dinner with Daniel Ellsberg." What?! Apparently Ellsberg gave a talk at the University of California, Santa Barbara (where my dad was a professor until 2012) and had dinner at the home of his history professors afterward. That was my parents best friends, so they were invited along. How cool is that?!