Review: The Art of Flying by Antonio Altarriba 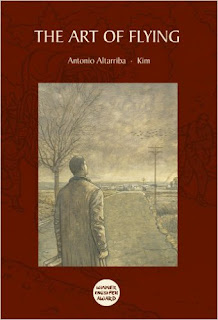 Summary (from the inside flap of the book): When published in 2009, The Art of Flying was hailed as a landmark in the history of the graphic novel in Spain for its deeply ouching synthesis of individual and collective memories. An intensely personal testament, Altarriba's account of what led his father to commit suicide at the age of ninety is a detective novel of sorts, one that races his father's life from an impoverished childhood in Aragon, to service with Franco's army in the Civil War, escape to join the anarchist FAI, exile in France when the Republicans are defeated, to return to Spain in 1949 and the stultifying existence to which Republican sympathizers were consigned under Francoism.

The Art of Flying is immensely moving and vivid, beautifully drawn by Kim. It was highly praised in Spain on first publication, where it was compared to Art Spiegelman's Maus. It went on to win six major prizes, including the 2010 National Comic Prize. 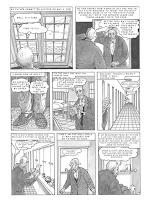 Well, this book is sort of a downer because the life of the main character, the author's father, was so tragic. He fought against the fascists in Spain as Franco took power, he was in prison camps in France during World War II, and he managed to get mixed up with nefarious types in every business dealing he had. What a tough life he led, while all along being a good guy... mostly.

But, there were good things as well. he formed amazing friendships along the way with men that held similar ideals and there were people who supported him during the worst times. People housed him, fed him, and loved him. It also seems that he and his son has a special connection (they called it an alliance).

I think this book has an important message to tell and it covers a part of history that I didn't know about so that's a good reason to read it. But, it isn't up-lifting, that's for sure.