They Were Like Family to Me by Helen Maryles Shankman 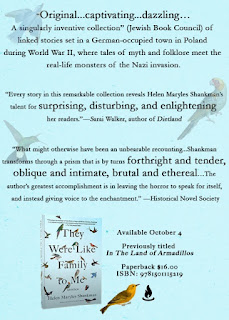 Title: They Were Like Family to Me
Author: Helen Maryles Shankman
Year Published: 2016

Critically praised, beloved by readers, In the Land of Armadillos has an evocative new cover and title, They Were Like Family to Me. Now in Paperback! Available October 4.

1942. With the Nazi Party at the height of its power, the occupying army empties Poland's towns and cities of their Jewish citizens. As neighbor turns on neighbor and survival often demands unthinkable choices, Poland has become a moral quagmire—a place of shifting truths and blinding ambiguities.

Blending folklore and fact, Helen Maryles Shankman shows us the people of Wlodawa, a remote Polish town. We meet a cold-blooded SS officer dedicated to rescuing the Jewish creator of his son's favorite picture book; a Messiah who appears in a little boy's bedroom to announce that he is quitting; a young Jewish girl who is hidden by the town's most outspoken anti-Semite—and his talking dog. And walking among these tales are two unforgettable figures: silver-tongued Willy Reinhart, commandant of the forced labor camp who has grand schemes to protect "his" Jews, and Soroka, the Jewish saddlemaker, struggling to survive.

Channeling the mythic magic of classic storytellers like Sholem Aleichem and Isaac Bashevis Singer and the psychological acuity of modern-day masters like Nicole Krauss and Nathan Englander, They Were Like Family to Me is a testament to the persistence of humanity in the most inhuman conditions.

“One of the most original and consistently captivating short story collections to have appeared in recent years…(They Were Like Family to Me) is a singularly inventive collection of chilling stark realism enhanced by the hallucinatory ingredient of top-drawer magical realism, interrogating the value of art, storytelling, and dreams in a time of peril and presenting hard truths with wisdom, magic, and grace.” —Jewish Book Council