Review: The Theory of Death by Faye Kellerman 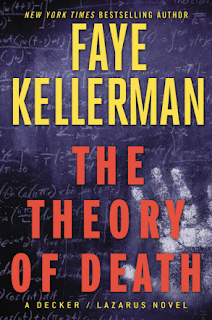 Summary (from the back of the book): It has been a year since Greenbury's last murder. Peter Decker, a former lieutenant for LAPD, has enjoyed the slow pace of his new job with the sleepy upstate police department. All that changes when an unidentified, nude male body is found deep within the local woods.

It appears to be a suicide--single shot to the head, gun by his side--but until the coroner makes the final determination, Decker must treat the scene as a suspicious crime. The first thing he must do is identify the body--no easy task. But then Decker gets lucky. Tyler McAdams, a former Greenbury detective and now a first-year law student, calls Decker, and once he hears about the intriguing case, his attentions shift from statutes to corpses.

When the body is finally identified, Decker and McAdams must penetrate into indecipherable upper echelons of mathematics and mathematical prodigies at Kneed Loft College. It turns out to be a dangerous sphere of scheming academics, secret cyphers, and hidden corruption, where even harmless nerds can morph into cold, calculating geniuses. They will have to employ all of their wits to penetrate enigmatic formulas and codes to solve a dark, twisted tale created by depraved, evil masterminds.

Review: I am a real Faye Kellerman fan and think I have read all her Peter Decker/Rina Lazarus books. This installment was no exception: good story, characters I like, and a fun read.

I really like a series where I get to know the characters, see them age and mature in real time, and get to know their families. She also has many repeat secondary characters (members of the police force, friends, etc) and that's fun, too. They are also all "normal." They have regular jobs and interests and family issues so they are relatable. The new characters, the ones involved in the crime are the ones who have the strangeness about them. I think it's a good balance.

And Kellerman writes a good detective story. I never quite figure it out and it never seems to end too quickly. I often find that with mysteries: the truth doesn't seem quite possible and the end is often rushed. Not so with Kellerman's books. I am always satisfied in the end, feeling like it is plausible and believable. And that's a good thing.