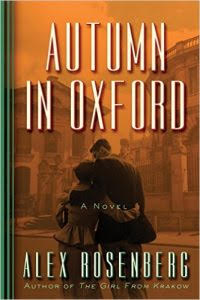 Summary (from the back of the book): During the Cold War, a scholar with a secret past is framed for murder by powerful enemies. After being blacklisted for having communist sympathies as a student twenty years before, Pulitzer Prize-winning historian Tom Wrought escapes America's Cold War climate to teach at Oxford. There, he falls in love with Liz Spencer, a beautiful married woman. When Liz's husband is pushed in front of a train in the London Underground, Tom is immediately arrested for the murder. Scotland Yard is convinced it has its man, as he had means, motive, and opportunity.

Certain of his innocence, Liz hires a young solicitor, Alice Silverstone, to defend Tom. But they discover that Tom's former secret work as an American spy made him a number of powerful enemies. Russian intelligence, British counter espionage, and even the FBI all may have reason to frame him. If Liz and Alice can find out who is behind the murder, they stand a chance of freeing Tom, but doing so puts all their lives at risk.

Review: Another good book from the TLC Tours; thank you! I have passed this one on to my dad who enjoys spy stories and will be interested to see what he thinks of it.

The first 80 pages or so of this book focus on Tom and Liz's romance, how they met, how they sneak around to see each other (and some steamy sex scenes), and the beginning of the murder investigation. That portion of the book mostly kept my attention, but I got really into the story when Tom begins to document his time in university (late 1930s and early '40s), his work with African-Americans during World War II, his time as a spy near the end of the war and into the 1950s. This is the main part of the book and is jam-packed with action, intrigue, and fascinating plot twists that involve the Soviet, British and American intelligence agencies. I was familiar with many of the characters as they are all real-life historical characters and that made it seem all the more real and believable. At the end of the book the author has a few pages detailing who the people were in real life. I love that!

The characters also pulled me in; I liked that while Tom was important, Liz and Alice were strong, smart women that played pivotal roles in figuring it all out, dealing with spies and government agencies, and they didn't fall for the roles most women of the 1950s played.

If you're into spy stories, stories of intrigue, mysteries, and books set in the 1950s, this is a book for you.