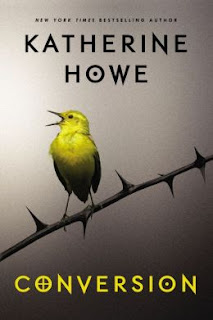 
Genre: YA historical fiction and regular fiction
Pages: 402
Rating: 4.5 out of 5

Summary (from the back of the book): It's senior year at St. Joan's Academy, and school is a pressure cooker. College applications, the battle for valedictorian,deciphering boys' texts: through it all, Colleen Rowley and her friends are expected to keep it together. Until they can't.

Soon the media descends on Danvers, Massachusetts, as everyone scrambles to find something, or someone, to blame. Pollution? Stress? Or are the girls faking? Only Colleen--who's been reading The Crucible for extra credit--comes to realize what nobody else has: Danvers was once Salem Village, where another group of girls suffered from a similarly bizarre epidemic three centuries ago....

Review: Such an interesting premise for a story. This book alternates chapters between 1706 Salem, Massachusetts and the witch hunts and modern day Danvers, Massachusetts and a string of girls who get sick. In her Author's Note, Howe says that she was inspired by the events in 2012 in Le Roy, New York (you can read a lengthy NY Times article about it here). I love that this is inspired by other literature and real life! Howe has done extensive research to be true to both stories, while creating a work of fiction. It adds to the authenticity that Howe herself is a direct descendant of three of the women accused during the Salem Witch Hunts.

This book was really well done and I liked that the author alternated the Crucible/historical sections with the modern; it made the parallels even more obvious. As much as life has changed, some things are still the same!

The main character, Colleen, is so stable. She is smart, a good friend, has sane parents, and I like her connection to the teachers, administration, etc in the school. She is a good central point for the story. I think high school students will really like this one as they can relate to the characters and will probably have read the Crucible or at least heard of the Salem witch trials.