Review: The True Story of Hansel and Gretel by Louise Murphy 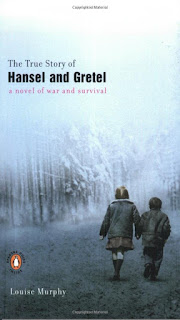 Summary (from the back of the book): In the last months of the Nazi occupation of Poland, two children are left by their father and stepmother to find safety in a dense forest. Because their real names will reveal their Jewishness, they are renamed "Hansel and Gretel." They wander in the woods until they are taken in by Magda, an eccentric old woman called "witch" by the nearby villagers. Magda is determined to save them, even as a German officer arrives in the village with his own plans for the children.

Review: A twist on an old tale... and I thought it worked well because the parallels weren't over done. World War II is one of my favorite historical fiction topics so this one was an easy one to pick up when I was perusing at Costco.


But that's where the similarities between this book and the fairy tale end. Poland in the last year of the war is in such horrible shape. With the Nazis and collaborators running things in the village, life is awful for those who managed to survive. Beatings, starvation, sexual acts of savagery, and more were commonplace under the Nazis and as the Russians advance west and drive the Nazis out, life does not improve as the Germans wanted to leave no trace of their wrong-doings. Seeing all of this through the eyes of children and an elderly woman and a few other characters who love each other and are trying to find life and normalcy in a time of terror, is a very effective way to read about this time period.