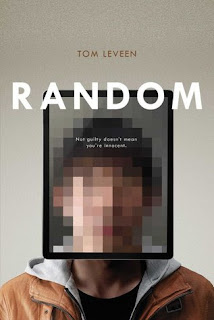 Summary (from the inside flap of the book): late at night Tori receives a random phone call. It's a wrong number. But the caller seems to want to talk, so she stays on the line. He asks for a single thing--one reason not to kill himself.

The request plungers her into confusion. Because if this random caller actually does what he plans, he'll be the second person connected to Tori to take his own life. And the first just might land her in jail. After her Facebook page became Exhibit A in a tragic national news story about cyberbullying, Tori can't help but think the caller is a fraud. But what if he's not? Her words alone may hold the power of his life or death.

With the clock ticking, Tori has little time to save a stranger--and maybe redeem herself--leading to a starting conclusion that changes everything....

Review: Tom Leveen has done it again. He manages to write books for young adults that are quick reads, interesting reads, and important reads.

Bullying, cyberbullying, and suicide are such important topics and I like that this book deals with them in a way that teenagers can relate to. It isn't a preachy, heavy book, but rather a realistic look at the issue. And, it's from the perspective of the bully, which is different from so many other books on this topic.

I don't really know what else to say about this book because I don't want to give anything away in my review. I liked the characters, not because I LIKE them, but because they are well done. The story moves quickly (I read the book in one sitting last night) and is believable. I think teens will really like this one.