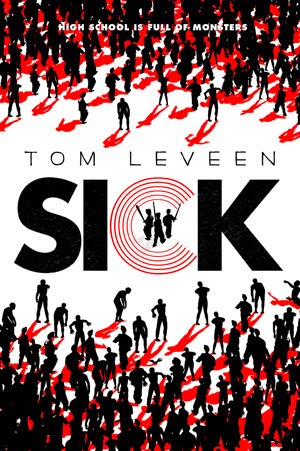 Summary (from the inside flap): The fence around Phoenix Metro High School is for the students' protection. But it also keeps them trapped--unless you're in with Brian and his friends, who know how to break out better than anyone. That knowledge comes in handy when people start getting sick during a pep rally. Really sick. They aren't themselves--they're dangerous. Really dangerous. Ripping each other to shreds. Refusing to die. When the sickness spreads, Brian's stuck in stagecraft class with his best friend, Chad, and a bunch of drama kids. But his sister's out there somewhere, and also his ex, and if he doesn't find them soon, the sick kids will....

Review: I really like Tom Leveen's books! I reviewed both Party and Zero, giving them glowing review; I'll add this one to the list of Leveen books that I recommend. This book was so very different from the other two since it's a horror book. Let me start by saying that horror is definitely not a genre that I choose to read. I am a wimp and don't enjoy reading about monsters, death, destruction, and all that goes along with the horror genre. But I read this one off the recommendation of my friend Kelly who said it wasn't a typical horror book. And, it's Tom Leveen.

Yes, this is a horror story. There are zombies, lots of gruesome death and details that are really gross. So, if you enjoy that stuff this book will definitely satisfy you. However, there is also a good story behind it all and moments of humor and light heartedness that kept me going. More importantly, there are moments of humanity that I find so important in a story. I liked the relationships among the students that we get to know. They aren't all nice to one another, they are homophobic and racist and have the typical social cliques that exist in high school. But some of them are able to see beyond that at times and be human. That's important and it moves the story forward and around the zombies.

I also loved that it's the drama kids that battle the zombies. And that anti-anxiety drugs are a possible antidote. It's the underdogs subtly and steadily fighting their way through the nastiness to triumph.