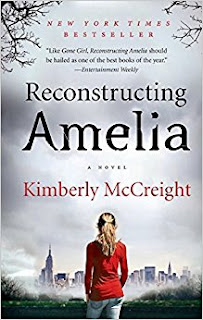 Summary (from the back of the book): Litigation lawyer and harried single mother Kate Baron is shocked when her daughter's exclusive Brooklyn private school calls to tell her that Amelia--her intelligent, high-achieving fifteen-year-old--has been caught cheating. But when Kate arrives at Grace Hall, she's blindsided by far more devastating news: Amelia is dead. Despondent, she's jumped from the school's roof. At least that's what Grace Hall and the police tell Kate. It's what she believes, too, until she gets the anonymous text: Amelia didn't jump. Now, Kate is going to find the truth--no matter where it leads. Sifting through Amelia's emails, text messages, and Facebook posts, Kate reconstructs the pieces of her daughter's life and the people in it, uncovering why she was on Grace Hall's roof that day--and how she died.

Review: What a good book! It felt a bit like a typical YA book: teenage drama; high school life; lust; romance; school work; and family, but it also felt like a mystery with Kate trying to figure out what happened to Amelia.

The high school stuff was done well. I hated some of the students for what they did to Amelia over the few months of school that the book covers. They were cruel, uncaring, self-centered, and down right mean. They were so sure that they knew what they were doing (boy this is difficult to talk about without giving anything away) and that they were entitled to control other people's lives. I say I hated the kids, but I also think they were real. I could see that they had redeeming qualities, but the mob mentality and peer pressure just got ahold of them all as it all fell apart.

The adults were also at fault when it came to doing their job. Many of them made poor choices in order to save themselves and their reputations rather than doing what was best for the kids. There were some adults who tried to do the right thing, but the fear of litigation got in the way.

If I didn't like the people in this book why did I like it so much? I think the characters were done really well and I liked the story; I was pulled in from the start and wanted to know what happened to Amelia. It is so easy for people to get pulled into something they know they shouldn't do and when one is a teenager it seems even easier.