Review: The Outside Boy by Jeanine Cummins 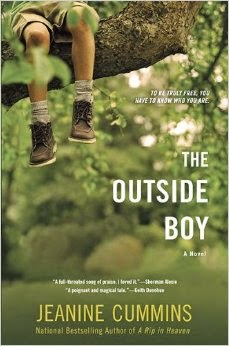 Summary (from the back of the book): Ireland, 1959: Young Christopher Hurley is a tinker, a Pavee Gypsy who roams with his father and extended family from town to town, carrying all their worldly possessions in their wagons. Christy carries with him a burden of guilt as well, haunted by the story of his mother's death in childbirth.

The wandering life is the only one Christy has ever known, but when his grandfather dies, everything changes. His father decides to settle briefly in a town, where Christy and his cousin can receive proper schooling and prepare for their first Communion. But still, always, they are treated as outsiders. As Christy struggles to find his way amid the more conventional lives of his new classmates, he starts to question who he is and where he belongs. But then the discovery of an old newspaper photograph and a long-buried secret from his mother's mysterious past change his life forever....

Review: I am on a kick of books set outside the United States that seem to feel "gentle" to me. Must be the mood I am in. I've also taken adult fiction books off my TBR shelf and FINALLY gotten around to reading them. That feels good.

I don't have a lot to say about this book, but I liked it. I enjoyed the setting of Ireland and the author did a great job of getting me to feel as if I were there through the not-too-poetic descriptions of the towns, the family, the scenery, and the people, but it's the use of the Gypsy dialect that best sets the scene. The use of words and the cadence of the language really helped me feel I was hearing the story through Christy and not just some narrator.

I also felt for Christy. He is twelve years old, but seems to be an old soul; he questions life, is smart, can read and write (unlike many pavees), and through reading is interested in the world. He loves his life on the road, yet yearns for friends, roots, and most of all wants to know about his mother. While I would normally be mad at the father character for not sharing more about his wife with Christy, I felt for Christopher, Sr and his grief over his lost love. I really cared about these characters (even the horse and dog who play important roles in Christy's life).

If you're interested in learning more about the life of the Irish travellers, being taken back in time to the 1950s, and investing in the life of a boy, then this book is a good one!