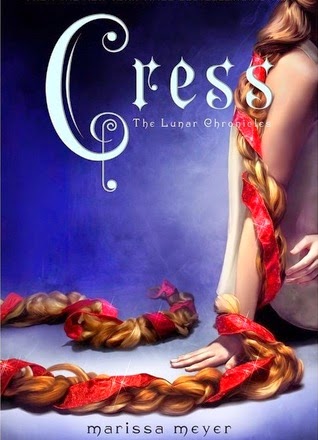 Summary (from the inside flap of the book): In this third book of the Lunar Chronicles, Cinder and Captain Thorne are fugitives on the run, now with Scarlet and Wolf in tow. Together, they're plotting to overthrow Queen Levana and her army. Their best hope lies with Cress, a girl imprisoned on a satellite since childhood who'd only ever had her netscreens as company. All that screen time has made Cress an excellent hacker. Unfortunately, she's just received orders from Levana to track down Cinder and her handsome accomplice.

When a daring rescue of Cress goes awry, the group is separated, Cress finally has her freedom, but it comes at a high price. Meanwhile, Queen Levana will let nothing prevent her marriage to Emperor Kai. Cress, Scarlet, and Cinder may not have signed up to save the world, but they may be the only hope the world has.

Review: Cyborgs, androids, outer space, life on the moon, fighting, romance, what more could a reader want?! This third installment of the Lunar Chronicles is really fun.

Cress is a great addition to the characters we already know in this series. She is smart, can hack into anything! She adds a great dimension to the skill set of this renegade group who can now fight, run, hack, plan, glamour, and outsmart the Lunar Queen. Meyer has made her a good balance of Cress being naive from her isolation and her ability to be super useful and competent.

The action is almost non-stop in this book, which is really fun. Of course it's all unbelievable and outrageous, but it's sci-fi, what do you expect? There's lots of chases, intrigue, tranquilizer darts, shooting, glamouring and excitement.

If you enjoyed the first two books in the series, you'll love this one, too. I am really looking forward to the release of Winter, the fourth book. And I assume Winter is Snow White.