Review: V is for Vengeance by Sue Grafton 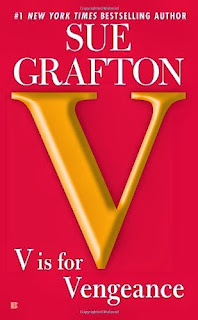 
FTC Disclosure: Someone lent me this book

Summary (from the back of the book): A woman with a murky past who kills herself--or was it murder? A spoiled kid awash in gambling debt who thinks he can beat the system. A lovely woman whose life is about to splinter into a thousand fragments. A professional shoplifting ring working for the Mob, racking u millions from stolen goods. A wandering husband, rich adn ruthless. A dirty copy so entrenched on the force he is immune to exposure. A sinister gangster, conscienceless and brutal. A lonely widower mourning the death of his lover, desperate for answers, which may be worse than the pain of his loss. A private detective, Kinsey Millhone, whose thirty-eighth-birthday gift is a punch in the face that leaves her with two black eyes and a busted nose.

Review: I can always count on Sue Grafton's alphabet series for a good read. I can count on the characters being realistic, the plot interesting, and the setting perfect.

I like a strong female detective and Kinsey Millhone is one of the best. She is smart, tenacious, great at solving puzzles, and doesn't back down from a threat or a fight. Throughout the series Kinsey is constant. She still wears her jeans, boots and turtle necks and she always has her stand-by black dress for any occasion. I like that over the past twenty years I have been able to rely on "knowing" Kinsey.

It's also fun that Grafton has kept to a chronology; each book directly follows the previous one, as if no time has passed from one to the next. It is now 1988 in Kinsey's world so there are no cell phones, only a few computers, and that all makes solving crimes different from today. It's kind of nice.

Grafton's plots usually involve murder, sometimes embezzlement, and usually multiple characters who all fit together nicely. This book was a little different in that we heard the story from three different perspectives. At first I wasn't sure about that since there really wasn't a "mystery" with an unknown murderer. The reader got to know what was going on the whole time. But, it was still a good story.

One of my favorite aspect of Sue Grafton's books is that they are set in Santa Barbara (Santa Teresa in the books) and I live in Santa Barbara. I can usually figure out where the action is taking place since Grafton names streets and neighborhoods similar to the real names.