Review: The Beast by Faye Kellerman 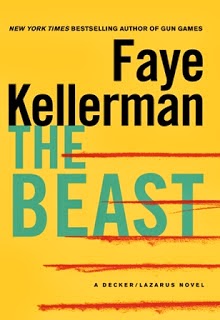 Summary (from the back of the book): Throughout his years with the LAPD, Peter Decker has handled a number of tough cases and strange killers. But few of his previous assignments compare to his latest case--the most bizarre of his storied career.

When Hobart Penny is found dead in his apartment, the cops think that his pet cat--an adult female tiger--attached the reclusive elderly billionaire. But it soon becomes clear that the beast that killed the eccentric inventor is all too human. Digging into the victim's life, Decker and his colleagues, Detectives Marge Dunn and Scott Oliver, discover that Penny was an exceptionally peculiar man with exotic tastes, including kinky sex with call girls.

Following a trail of clues that leads from a wildlife sanctuary in the San Bernadino Mountains to the wild nightlife of Las Vegas, the LAPD detectives are left juggling too many suspects and too few answers. To break open a case involving the two most primal instincts--sex and murder--Decker wrestles with a difficult choice. SHould he turn to a man with expert knowledge of both, Chris Donatti, the dangerous man who also happens to be the father of Decker's foster son, Gabriel Whitman, a boy not without his own problems?

Review: Good old Faye Kellerman. She never disappoints me with her detective novels! I have read all of her books and enjoyed every one of them.

Although Peter Decker is her main detective, Marge Dunn and Scott Oliver feature in each book as well. What I like is that their characters develop and evolve throughout the novels; they aren't static. I like them as characters as well since they not only move the story along, but show the personal side of Decker and the cases. The other secondary characters that are in each Kellerman mystery are also important and serve a similar purpose: Decker's wife Rina (orthodox Jew, brings in interesting cultural aspects); their children who are now grown but feature in the novels; and Gabe Whitman (foster son and has a mob connection).

The setting of Los Angeles is a good one for me as well. I live only 80 miles north in Santa Barbara so feel like LA is somewhere I know. When they mentioned neighborhoods, etc I can visualize what it must look like. And in this novel some of the action takes place in Santa Barbara. In fact, they exit the freeway on my exit to visit a home in my general neighborhood!

Kellerman's mysteries are always good ones and The Beast is no exception. At first I was convinced that I knew what was going on, but I didn't and the Beast is not what I expected. The plot is interesting, suspenseful, and a great story.