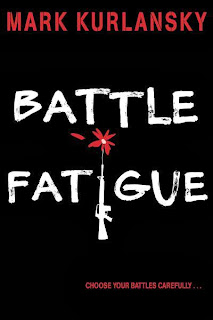 Summary (from the back of the book): Growing up after World War II, Joel Bloom and his friends dreamed of fighting in the military or leading the Dodgers tot he World Series. Turning eighteen with the Vietnam War in full swing, Joel is about to be drafted, and he realizes that the sides of war he learned about as a child are not nearly as clear. Joel has been taught to love his country but knows he cannot fight in a war. After trying and failing to be a conscientious objector, he must decide wether to leave for Canada or serve in Vietnam--a decision that would help him avoid the violence of war but force him to leave behind everyone he loves and turn his back on everything he was brought up to believe.

Review: I have been meaning to read this book for quite some time. I did my usual thing, which is to read the inside flap description a long ago so I began the book not really knowing what it was about. I had some vague memory that it involved the Vietnam Conflict.

The book beings with a prologue where Joel is trying to decide if he should go to jail or Canada, setting the scene of the book. The first half covers Joel's childhood in a small town where WWII looms large since all the men fought in the war and the boys know they will eventually fight in a war. War colors their games, their speech, their clothing, and their relationships. Though I think Kurlansky did a good job of describing small town life, but I wanted to get to Joel's older years sooner.

Once Joel goes off to college (to avoid the draft) the book definitely picked up for me. The Vietnam Conflict was in full swing, his friends were deciding what to do about the draft, the protest movement looms large and the story really pulled me in.

I also liked that we see how Joel's decision about Vietnam affects his life as an adult and those around him. I did like the characters in this book--Joel and his friends. They were well developed, had strong opinions, and I liked the relationships between the boys.