Review: The Boy Who Dared by Susan Campbell Bartoletti 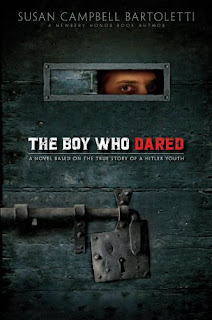 Summary (from the back of the book):  Just as the Nazis are rising to power, Helmuth Hubener, a German schoolboy, is caught up in al the swashbuckling bravado of his time. The handsome stormtropper uniforms, the shiny jackboots and armbands, the rousing patriotism--all serve to draw him into this bright new world full of promise and hope. In the beginning, his patriotism is unwavering. But every day the rights of people all over Germany are diminishing. Jews are threatened and their businesses are being destroyed. The truth has been censored, and danger lurks everywhere. Anybody can turn on you. The world has turned upside down: Patriotism means denouncing others, love means hate, and speaking out means treason. How much longer can Helmuth keep silent?

Review: I have read a lot of Holocaust literature so was excited to read this one because it is a little different: it is from the non-Jewish side. Things should have been easy for Helmuth since he is just an ordinary kid in Hamburg, Germany during World War II. All he had to do was follow the rules, keep his mouth shut, wear the right clothes, and ride out the war. But Helmuth couldn't do that....

Helmuth has good friends in this book, which is nice. They are regular kids, minding their own business, behaving themselves, and doing fine in school. Then the Nazis take over and this book shows very well how slowly, yet how quickly things change. Helmuth can no longer buy meat from the local butcher, a couple kids in his class "move away," and there is a curfew. Even his divorced mother begins dating a Nazi. The author shows how his mother's relationship makes life easier for them for a while: association with a Nazi official brings privilege.

But what about their neighbors and friends in town? What about Kristallnacht when the synagogues are burned? Why isn't anyone speaking out against the atrocities? Slowly Helmuth realizes he can make a difference. Armed with information he hears on the BBC radio he begins to make flyers to distribute anonymously throughout Hamburg.

This book is told alternating between Helmuth's time in prison as he awaits execution and his memories of the events that led up to his arrest. It is easy to forget that Helmuth is only 18 when he is in prison and even more interesting when you realize that this novel is based on a true story and a lot of research into Helmuth's prison records and interviews with his friends. I think this book is a good one for people to read to see another side of the Holocaust.