Reflection on a weekend 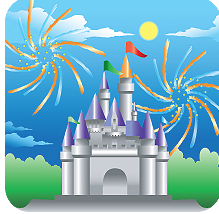 My daughter and I spent Friday through Sunday at the Disneyland Hotel attending the Showstopper Dance Competition. We had never stayed at the Disneyland Hotel before and I gotta' say, even if you aren't a Disney fan, you've got to be impressed with the attention to detail, the cleanliness, the friendliness of the staff, and the thoroughness with which they keep to a theme! 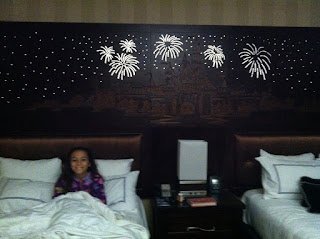 The headboard even had a switch to turn on the fireworks above the carved Cinderella's castle!

The competition was fierce, with amazing dancers from all over the nearby states. My daughter performed five group dances on Friday and her solo on Saturday. She isn't quite feeling her solo so we're going to make some changes before the next competition in mid-March. The funniest thing about this competition is all the trophies they give out: they are plastic silver and tacky. So, of course, we had to take a photo! The dancers also get medals for the group dances. It's all a bit much.

Here are some shots of my daughter with her lyrical group (in black) and one of her jazz groups (they danced to Boogie Woogie Bugle Boy). And, a couple photos from her solo. They aren't the greatest shots, but you get the idea. We really like her new costume as it looks great on stage.