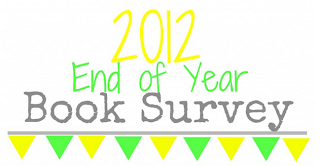 I borrowed this survey from Perpetual Page Turner . I've added some of my own statistics at the beginning and then answered (most of) her questions

Total books read: 78. Okay, that is 60 fewer books than in 2011. I knew I was in a reading slump the second half of this year, but I hadn't realized how much of a slump!

Female authors: 48 (62%)
Male authors: 30 (38%)
I actually don't pay attention to the gender of authors when I choose books to read, but I am surprised that this isn't a more even split. What I did notice is that a majority of my non-fiction books were written by men.

Adult books: 35
YA books: 43
In a reversal from last year, I read more YA books than adult!

Now that the details are exposed, how does that translate into actual books?

Best book of 2012?
I was not as bowled over by my 2012 books as I was by my 2011 books. Perhaps that contributed to my reading slump. I've chosen three of my "5 star" books to choose as my favorites for this year.

Worst book of 2012?
I tend not to finish books if I don't like them and then I forget about them, but here's the one I ranked the lowest of the books I finished this year (a 3.5 out of 5). 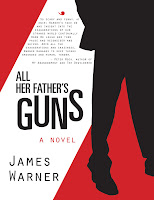 Most surprising (in a good way) book of 2012?
I didn't have very high expectations for Neal Shusterman's Unwind. Not because I don't think Shusterman is a great author, but because I wasn't really in the mood for that kind of book when I started it. And, well, it is SO good! I'll also put his Unwholly in this category because I was afraid that the sequel wouldn't live up to the first one and it does!

Book you recommended to people most in 2012?
I didn't really recommend any non-fiction books that I read this year to people. The fiction book I recommended the most is actually a book I read about 4 or 5 years ago: The Samurai's Garden by Gail Tsukiyama.

Best series you discovered in 2012?
Definitely Neal Shusterman's Unwind and Unwholly. I am really looking forward to the third in the trilogy. I would also say Veronica Roth's Divergent series was very good.

Most thrilling, unputdownable book in 2012?
Um, I guess I am going with Unwind, Unwholly and the Divergent series again.

Book you most anticipated in 2012?
Veronica Roth's Insurgent, for sure.

Favorite cover of a book you read in 2012?
We aren't supposed to judge a book by its cover, but I do. Here are some of my favorites.

Most memorable character in 2012?
Who do I most think about? Not one particular character. Interesting that none stuck with me the way some did last year. Sad.

Book you feel you should read in 2013? Ok, I kind of added this question...
A year ago I said I should read The Night Circus and I never ended up reading it. For 2013, I'll say I feel like I should read more. Just more books.

Book you are most anticipating in 2013?
The book I chose for this question last year, When She Woke by Hillary Jordan, ended up being one of my favorites. For 2013 I am looking forward to finishing the Neal Shusterman and Veronica Roth trilogies.