I have always been a huge Olympics fan. I love the pomp, the flags, the athletes, the touching stories, and, of course, the sports. I went to swimming and rowing when the Olympics were in Los Angeles in 1984 and in 2005 when it was announced that the 2012 Olympics would be in London I announced that I was going to attend. And I did and it was SO MUCH FUN! 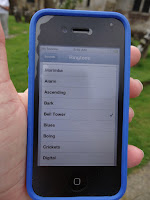 The Olympics began at 9:00pm on July 27, but at 8:12am every church in the country rang it's bells for 3 minutes. Regular people also rang bells in every town and city. We went down to the local church and I used the "bell tower" ring on my cell phone to join in. 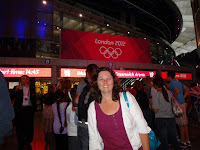 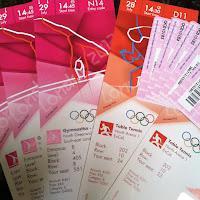 Our first event was the preliminaries of women's gymnastics on Sunday, July 29. When we got our tickets months ago I could hardly believe our luck. Women's gymnastics? Fantastic. So, imagine how I felt when I looked in my suitcase the morning of the event only to discover that my tickets were missing. Were they stolen from my suitcase? Did I leave them at home? (turns out the latter, what an idiot!) I burst into tears, feeling I had let down myself and my daughter, and I had ruined my vacation. We headed out to the CoSport office to see if they could reprint the tickets. Nope. Next to the gymnastics venue in northern Greenwich to see if they could help. The woman we appealed to initially said she couldn't help. I promptly burst into tears. I couldn't imagine that I had traveled 6,000 miles and I wasn't going to see the gymnastics! Well, the tears had a good effect: she found "contingency tickets" that got us in the door and into new seats.

The gymnastics was amazing! We saw Great Britain, Russia, China, and the US compete in all four apparatus (apparati?). What incredible athletes. 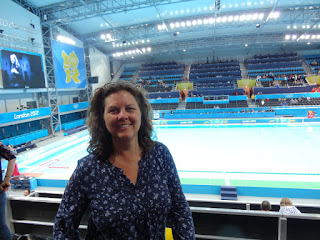 On Tuesday, July 31 we headed to the Olympic village. It was great to walk around and see the orbit (statue), various venues, the crowds full of fans, the flags, and the shop. I bought a Great Britain shirt to cheer on "Team GB." We watched men's water polo: Kazakstan versus Australia in a kinda' weak game and Italy battle Greece in a great game that ended in a tie. I haven't watched water polo since high school and had forgotten what a fun sport it is to watch, especially with the underwater camera work!
From water polo we headed to women's soccer in Wembly Stadium. We got to see Great Britain beat Brazil 1-0 in a really exciting game. Being in a stadium with 75,000 fans screaming and waving flags was so invigorating! 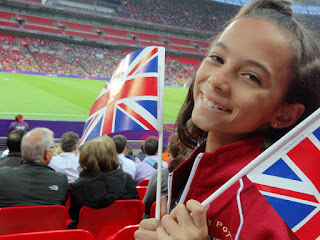 All in all a great success on the Olympic front. On the other days we watched Olympic coverage on the BBC: no ads, coverage of all sports, athletes who are honestly happy to be there whether or not they win a medal. And, it was all live since I was in the host country!

What have your experiences with these Olympics been?