Review: Whatever it Takes by Paul Tough 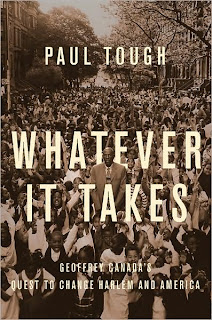 Title: Whatever it Takes: Geoffrey Canada's quest to change Harlem and America


FTC Disclosure: I received this book from my principal

Summary (from the back of the book): That was the question Geoffrey Canada found himself asking. What would it take to change the lives of poor children--not one by one, but in big numbers, and in a way that could be replicated nationwide? The question led him to create the Harlem Children's Zone, a ninety-seven-block laboratory in central Harlem where he is testing new and sometimes controversial ideas about poverty in America. His conclusion: if you want poor kids to be able to compare with their middle-class peers, you need to change everything in their lives--their schools, their neighborhoods, even the child-rearing practices of their parents.

Review: I have already read Geoffrey Canada's book about his experiences growing up called Fist Stick Knife Gun and thought it was really interesting, so when my principal offered this book about Geoffrey Canada as one of our faculty summer reads I jumped at the chance.

This book is choc full of information about Geoffrey Canada, poverty in America, efforts by many groups to "fix" education, and how the Harlem Zone works (and doesn't). If you've seen the film Waiting for Superman you've seen Geoffrey Canada and his Harlem charter school. They have some lofty goals and have really made strides towards reaching their goal of infiltrating the 24 block area in Harlem and fixing what ails it.

That makes sense to me. As an educator at a high school I see that most students' behaviors, systems, and attitudes are already in place; it is difficult (but definitely not impossible) to turn things around. If we could get to all children before pre-school, what a difference it would make.