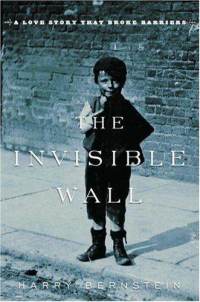 Summary (from Amazon): For On the eve of World War I, in a small English mill town, Harry Bernstein's family struggles to make ends meet. Harry's father earns little money at the Jewish tailoring shop and brings home even less, preferring to spend his wages drinking and gambling. Harry's mother, devoted to her children and fiercely resilient, survives on her dreams: new shoes for young Harry, her daughter's marriage to the local rabbi. Then Harry's sister does the unthinkable: she falls in love with a Christian boy. But they are separated by an "invisible wall" that divides Jewish families on one side of the street from Christian families on the other. When Harry unwittingly discovers the secret affair, he must choose between the morals he has been taught all his life, his loyalty to his selfless mother, and what the knows to be true in his heart.

Review: This book has been on my shelves for a really long time and I figured it was high time I read it. And, since I am in England, it seemed fitting to read it here since that is the setting for the story. Confession: all this time I've thought the book was a novel. Not until I took it off the shelf to pack it in my suitcase did I realize that it's a memoir!

I get frustrated when the blurb on the back of a book gives a description that doesn't quite fit the book. Yes, it's the eve of WWI, but that is merely the time period. The war doesn't really figure into the story until about two thirds through. However, the impact of the war on those living on the street is obvious as the men are sent off to war and either don't come home or come home broken, both physically and mentally. My other frustration is that the blurb on the back emphasized the romance between Harry's sister and a Christian. Again, only glimmers of this until about two thirds of the way through. But this plot line is huge for the last third and is very interesting once it gets going.

Instead, this book is really a study of poverty and culture in 1910s England. Harry grew up on a street that had Jews living on one side and Christians on the other. They only interact when the Jews have to cross the street to buy groceries. They tolerate one another, but it is not until the very end of the book, after the war has ended, that they come together and acknowledge they've spent all this time on the same street! Oh, the only real interaction they had was on Friday nights when the "goys" crossed the street to light the fires in the Jewish homes on the Sabbath.

As I read I thought a lot about my father's growing up years. He grew up in a small village in Scotland just after WWII and I think many of his experiences were similar to those of this author: a father who spent all the money on drink; poverty at an extreme level; being the smartest kid around and suffering because of it; and a mother who made it all work for her children. The mother in this book is a particularly interesting "character"; she is so strong and determined to make things right for her children, yet she cannot cross her husband and ask for anything so they all suffer greatly.

As long as you go into this book knowing the summary isn't necessarily what you are going to get,  this is a good book to really get a feel for the poor in England during WWI.