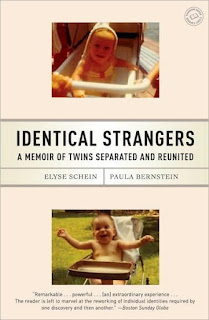 Title: Identical Strangers: a memoir of twins separated and reunited

Summary (from Amazon): Elyse Schein had always known she was adopted, but it wasn't until her mid-thirties while living in Paris that she searched for her biological mother. What she found instead was shocking: she had an identical twin sister. What's more, after being separated as infants, she and her sister had been, for a time, part of a secret study on separated twins.


Paula Bernstein, a married writer and mother living in New York, also knew she was adopted, but had no inclination to find her birth mother. When she answered a call from her adoption agency one spring afternoon, Paula's life suddenly divided into two starkly different periods: the time before and the time after she learned the truth.

Review: I will confess that as a kid I always thought it would be fun to be a twin. Now as an adult I am over that, realizing that what we are makes us who we are. So, what happens when you are a single for 35 years then discover that you are a twin? Does it change who you are? How you see the world? How people treat you? These questions and more are discussed in this interesting book.

Elyse and Paula discover that they are identical twins, separated at 5 months. Through their investigation into finding their birth mother and more about why they were separated, they uncover a frightening series of events. It turns out psychiatrists worked with their adoption agency doing a study on nature versus nurture. What better way to do that than to separate identical twins?! Oddly many of the twins were also from birth mothers with a history of mental illness.

Yes, it was the 1960s when things were different. I just don't think this would happen now, especially with open adoptions. These women really went on a roller coaster trying to discover how much of themselves, their lives, and their personalities related to their birth mother, to being twins, and more.

I found this book interesting, but not completely gripping. I was glad the book had more than just their story, including historical information about twins, the twin study, and other identical twins who had been separated at birth.