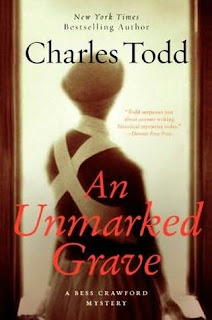 
FTC Disclosure: I received this book for free from the publisher as part of a TLC Tour

Summary (from the back of the book): In the spring of 1918, the Spanish flu epidemic spreads, killing millions of soldiers and civilians across the globe. Overwhelmed by the constant flow of wounded soldiers coming from the French front, battlefield nurse Bess Crawford must now contend with hundreds of influenza patients as well. But war and disease are not the only killers to strike. Bess discovers, concealed among the dead waiting for burial, the body of an officer who has been murdered. Though she is devoted to all her patients, this soldier's death touches her deeply. Not only did the man serve in her father's former regiment, he was also a family friend.

Before she can report the terrible news, Bess falls ill, the latest victim of the flu. By the time she recovers, the murdered officer has been buried, and the only other person who saw the body has hanged himself. Or did he? Working her father's connections in the military, Bess begins to piece together what little evidence she can find to unmask the elusive killer and see justice served. But the tenacious and impetuous nurse must be vigilant. With a determined killer on her own heels, each move she makes may be her last.

Review: World War I is one of my favorite historical eras to read about (and teach) so when I was offered this novel for a TLC Tour I jumped at the chance. The fact that this is the fourth Bess Crawford book didn't really occur to me until I was well into the book and realized some of the characters might mean more to me (and confuse me less) if I had read the previous three books. But, no matter, the book still works even without reading the others.

Bess is a great main character. She is efficient, organized, friendly, and professional, a woman who works a dangerous job during a terrible war. I liked that while she needed the male characters to help her, more due to the time period than any incompetence on her part, she figures out the mystery on her own, makes good decisions, and is strong.

The setting of the book is also done well. World War I was such a devastating war with vestiges of past wars (hand to hand combat, pistols, mass amputations, etc) mixed in with the modern trappings of the twentieth century (gas attacks, bombings, and tanks). Todd describes well the horrors of the war as Bess moves along the front lines in France as well as the impact the "total war" had on the people back home in England. And including the Spanish Influenza epidemic was brilliant; it gave the characters extra obstacles while not seeming unrealistic.

The mystery itself is a good one until the end. I often find that mysteries end too quickly (which this one didn't) or that the killer comes out of nowhere (which this one did). Other than that, I really enjoyed this book and thank Trish at TLC Tours for hooking me up with it.

If you'd like to win a copy of this book (and Bitter Truth, number 3 in the series), go to my give away post and fill in the form (give away ends June 28, 2012, coincidentally the anniversary of the day Austria's Archduke Franz Ferdinand was shot, setting off the events of WWI).