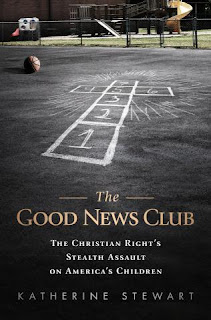 
FTC Disclosure: I borrowed this book from my mother who bought it at a book signing

Summary (from the inside flap of the book): In 2009, the Good News Club came to the public elementary school where journalist Katherine Stewart sent her children. The Club, which is sponsored by the Child Evangelicalism Fellowship, bills itself as an after-school program of "Bible study." But Stewart soon discovered that the Club's real mission is to convert children to fundamentalist Christianity and encourage them to proselytize to their "unchurched" peers, all the while promoting the false but unavoidable impression among the children that its activities are endorsed by the school. Astonished to discover that the US Supreme Court has deemed this--and other forms of religious activity in public schools--legal, Stewart set off on an investigative journey to dozens of cities and towns across the nation to document the impact.

Review: I think it is dangerous to write a book on a controversial topic when you have so much at stake personally and, at first, Stewart falls victim to this as the beginning of the book comes out swinging. However, it felt to me like once she got the anger out of her system, she gives a factual account of the Good News Club, their parent groups, and some of the on-the-ground people that she met.

I know that I am probably going to get some angry commenters for reading this book. For example, I was reading this at school and was really careful to hide the cover and had put the book aside on a low shelf below our circulation desk counter. One student leaned over into our space and saw the title. He got angry and told us that some opinions have no right to be expressed. I must admit that just gave more weight to Stewart's work.

One of my two favorite chapters is the one on how the Good News Club and its parent group use the New York public schools on Sundays to run their churches. Stewart shows, and this is a major theme in the book, how the group uses public elementary schools for their meetings so that they can have access to young children who are the easiest to convert. By using classrooms, they see the lists of students (including first and last names as well as personal information that the students have posted in their assignments). These children are seen as sinners who need to be saved.

The other chapter that I found most interesting is about the Texas school board and the influence of the evangelical groups to influence the social studies textbooks and curriculum. For example, they removed Thomas Jefferson from the required people to discuss and replaced him with John Calvin and other Christian leaders. The word democratic and democracy were also removed since they are too closely aligned with the Democratic party.

Whatever your personal religion or beliefs, this book is a fascinating look at how one group in particular is making a concentrated effort to get into schools and have access to young children, something we all need to be mindful of no matter who the group is.