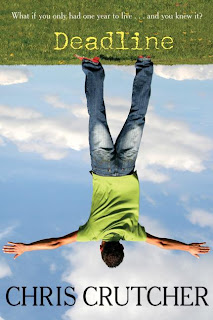 Summary (from the inside flap of the book): Ben Wolf has big things planned for his senior hear. Had big things planned. Now what he has is some very bad news and only one year left to make his mark on the world. How can a pint-sized, smart-ass eighteen-year-old do anything significant in the nowheresville town of Trout, Idaho? First, Ben makes sure that no one else knows what is going on--not his superstar quarterback brother, Cody, not his parents, not his coach, no one. Next, he decides to become the best 123-pound football player Trout High has ever seen; to give his closed-minded civics teacher a daily migraine; and to help the local drunk clean up his act. And then there's Dallas Suzuki. Amazingly perfect, fascinating Dallas Suzuki, who may or may not give Ben the time of day. Really, she's first on the list. Living with a secret isn't easy, though, and Ben's resolve begins to crumble...especially when he realizes that he isn't the only one in Trout with secrets.

Review: Ah, Chris Crutcher. His books are just so good and I think this is one of my favorites. Like his other novels Ben, the main character, is an athlete, which always sets a good tone, especially because the main character is usually a good guy. Crutcher does a great job of creating thoughtful, caring, and really interesting main characters. The supporting characters, however, can be awful, mean, or wonderful, filling out the cast so well.

This book is really about secrets. When we choose to create a secret it infests our lives. We have to remember what version we've told to which people and often spend a lot of energy working to cover up the truth. Ben discovers this about half way through the book and realizes that sharing the truth will make his illness much easier to handle since he won't be alone in the process. Reading about Ben's mature attitude toward his upcoming death (and that is not a spoiler since you learn of it in the book's summary) was refreshing. But Crutcher also made Ben, his friends, and his family realistic. There is no point when I thought, "really? that just wouldn't be." In fact, it made me think about what I would do if I knew I had only a year or less to live. Ben sees the knowledge as a gift and decides to live life to its fullest while he can.

This book snuck up on me and whacked me up side the head with emotion, thoughtfulness, humor, and self-insight.