Review: 12 Things to do Before you Crash and Burn by James Proimos 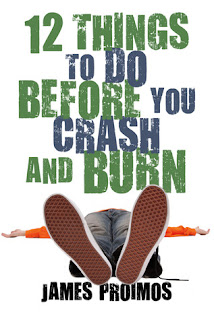 Title: 12 Things to Do Before You Crash and Burn

Summary (from the inside flap of the book): Hercules has until the end of summer (i.e., two weeks) to accomplish twelve tasks. The tasks will take him to the far reaches of Baltimore, lead him to a Beautiful and Unattainable Woman, and change the way he sees his past, present and future.

Review: Honestly, a chose this book because it's so short. I hadn't read at all this week until last night and I wanted to feel like I had accomplished some reading. But who knew I'd find such an enjoyable read in the process?

Hercules, a nick name earned when he opened an inoperable pickle jar, is sixteen and his father has just died so his mother sends him off to be with his uncle for two weeks. Hercules doesn't particularly like his uncle, but the uncle gives him a list of twelve tasks to complete in twelve days. They seem stupid, but Hercules has nothing else to do.

While Hercules does complete all the tasks, they don't always turn out the way the reader (or Hercules) expects. There are life lessons, poignant moments, and a sense of humor throughout this slim volume as Hercules navigates the world self-discovery.