Review: The Cellist of Sarajevo by Steven Galloway 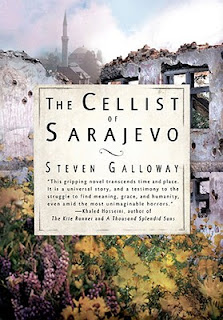 Title: The Cellist of Sarajevo


FTC Disclosure: I received this book as a gift

Summary (from Amazon): In a city ravaged by war, a defiant young musician decides to play his cello at the site of a mortar attack for twenty two days, in memory of his fallen friends and neighbors. Drawn into the orbit of his music are three strangers, each living like fugitives in their homeland: a bakery worker, a young father, and finally, a woman--a sniper--who holds the fate of the cellist in her hands, even as her own fate becomes just as changeable with each passing day.

Review: I have heard such good things about this book, but it was not what I expected. That doesn't mean I didn't like it, I did. But from the description on the back I thought the tale would be about four people who are together each day at the site of the mortar attack and that their lives would be very intertwined. On the contrary, the four narrators don't interact directly.

I haven't been to Sarajevo, but like most other adults, followed the war in the mid-1990s via the news. I know, that doesn't mean I understand what it was like, how the people felt, or how their lives were really impacted. However, this book gave new meaning to those news reports that seem so long ago.

This is going to sound strange, but war is harsh, loud, and gritty and this book felt like none of those things. The writing is gentle and calm and though the stories and situations were awful, it feels like a peaceful book. I think this style suited the story really well as it showed how people's lives during the siege of Sarajevo slowed down. In order to get water for his family one character takes hours carrying containers across the city, dodging sniper fire, waiting in safety on street corners until it instinctively feels safe to cross. Another character plays the cello to commemorate the fallen. The sniper waits in buildings to pick off targets from "the other side".

I think this novel is a really interesting study as to how war affects individual people, how daily tasks become the focus of one's day, and how humanity loses its human-ness. While the writing is gentle, the story is powerful.